I’ve never minded early starts and they’re much easier when I can have a quick hot shower to wake up. I turned mine on and the water filtered through like a drink through a straw. It was ‘great’ start to the day. I made my way to the bus stop and boarded a tourist bus to Pokhara. Not a public bus. I didn’t fancy my chances on the roof.

Five minutes after we set off, the bus stopped abruptly. The driver didn’t explain anything and just left us for around thirty minutes. He returned and then pulled into a petrol station. It turns out we were in a queue to fill up. I’ve mentioned the fuel crisis before and I really counted myself lucky that I was able to make this journey in the first place. As expected, it was a bumpy ride. But that was quickly forgotten along the way. We headed up into the Gods along the winding and narrow roads with spectacular views of various peaks and lakes along the way. Seven-and-a-half hours later, I’d reached Pokhara. It was already warmer and sunnier than Kathmandu. I could walk without a jacket on!

I’d arranged a transfer from the bus station to my hostel beforehand. As I got off the bus and looked for a name card, a rather burly-looking chap shouted “CHOUDHURY!” He took my bags and I was expecting to walk over to a Suzuki. Instead, he walked over to his moped. I looked at him and he looked at me. How did he think this was going to work? I had my large backpack and a small one, and then there’s him, Suman is his name by the way. He’d clearly done this before. He placed a bag between his feet and I strapped the large one on my back. I was worried we were going to topple over. Thankfully it was just a short journey.

Upon arrival, it turned out Suman was my host too. He checked my details for my booking and then said in an American accent: “I’ve got to be honest buddy, I really fucked up your booking!” I was calm and waited for him to finish. I wasn’t annoyed yet. The main reason I was in Pokhara was to paraglide. Suman soon became the bearer of bad news. He told me that there was a pilots strike over disagreements with their license fees, meaning all paragliding activities are cancelled. Pokhara has a reputation as one of the top places in the world for paragliding. Now I was getting irritated. Then I was shown my room. It was damp, there was stench from drain in the bathroom, a hole in the wall and mosquitoes scattered across the bathroom tiles. And now I was angry. He assured me that he’d refund me for my room. I was starting to get flashbacks to a similar situation I experienced once in Vietnam, where there was a room mix-up. I just dropped my bags and went for a walk to clear my head, which turned out to be a good decision.

After getting onto the main road I could see the beautiful lakeside. It was a gorgeous turquoise colour and so peaceful. I could no longer feel the pollution of Kathmandu and could breathe much easier. I became familiar with the streets and there were many bars and restaurants scattered along the main strip. It felt like a tourist resort in parts, it wasn’t tightly squeezed and noisy like Kathmandu.

Now that the paragliding was off, I needed a plan B for the next day. I woke up the next day feeling positive and arranged a hike to the World Peace Pagoda with four other tourists from my hostel. Our guide Yogendra arrived and took us along the lakeside to begin our walk. I’m not one for awkward silences, so I got the ball rolling on introductions. Luckily everyone spoke English. It was really warm morning too and I already knew this going to be hard work. Along our trip we stopped off to see a waterfall, Devi’s Falls also known as David’s Falls. Named after a Swiss tourist who plunged into the water and drowned with his girlfriend. We walked down into the Gupteshwor Mahadev Cave too. It was even hotter down there. We got back on our trail and two buses whizzed past with people singing and dancing loudly. It is clearly wedding season in Nepal! 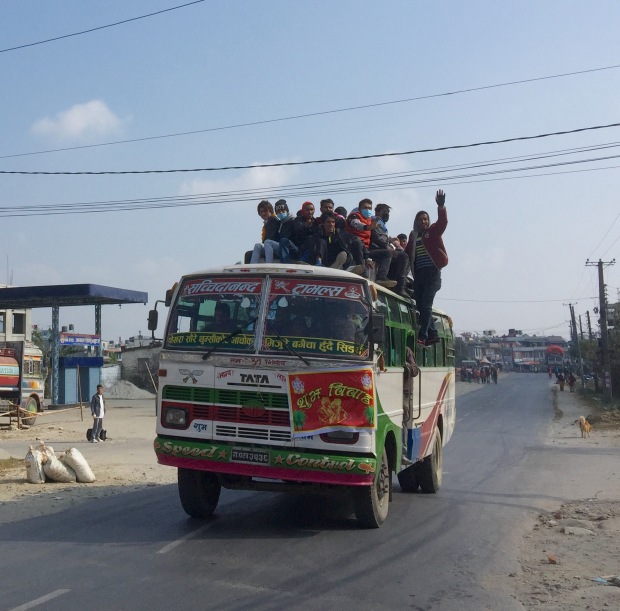 We walked high up into the forests. Wearing battered Nike Air Max’s was always going to be a risk and quite possibly a stupid idea. There were a few near-misses but no catastrophes thankfully. After a few hours of sweating, we stopped for lunch at a local restaurant. After refuelling we plodded along and made it to the top.

We reached the summit and there were stunning views of the city, lakeside, hills and in the distance you could see the Himalayan peaks. At the top of the summit was the World Peace Pagoda, a pristine Buddhist temple. It was very calm and respectfully we all kept quiet. We made our way back down a different way, which was much quicker and got into small colourful wooden boats. I tried my hand at rowing too. It’s bloody hard work! After an hour we reached back to our side of the lake and I returned to the hostel to brave a shower. I wish I had a peg for my nose! 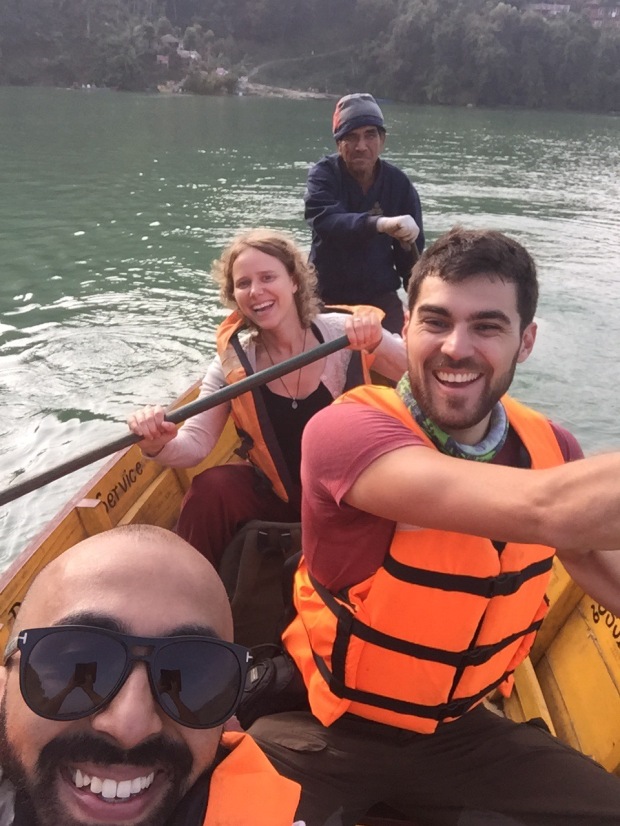 I’d arranged to meet my fellow IVHQ volunteers who I began the programme with in Kathmandu. Nikki, Lauren, Lily and Kristina met me at a local restaurant. It was great to see them and felt like old friends catching up and we kicked off by discussing our placements. We smoked some shisha and listened to the house band, who played some familiar sounds. They laughed at our requests for tracks by Beyoncé and R. Kelly. The lead singer created a morbid atmosphere with his sad face. To make up for it, Lauren and Lily treated us to Nicki Minaj’s verse on Monster, they didn’t miss a single bar! It was a good end to the day after the initial disappointment when I arrived.

We were all quite excited too because there was a possibility we’d be paragliding the following day. I was a little nervous about it but it’s something I really wanted to do. I woke up hopeful, but the strike continued. During this strike, no one wins.

Now I was left with a free day. I didn’t feel like doing anything and that’s ok because I came here to relax. I sat by the lakeside and started to read The Alchemist, by Paulo Coelho. It’s been recommended to me so I wanted to see what the hype was about. I walked for a few hours to explore Central Pokhara. I found a cute little cafe, which is also a makeshift yoga and meditation studio. I treated myself to a burger. I needed some junk. All of this dhaalbhat had turned my insides into a bag of lentils.

Whilst walking back through the main strip I became a target for the street sellers. Everything’s for sale and I mean everything! One man walked with me for around five minutes and in the end gave me a business card. He’s allegedly a paragliding agent, but he was working in an industry with a different kind of high. Their persistence and humorous pitches can be quite entertaining.

I arranged to meet the IVHQ ladies again for one last meal. They were all due to paraglide the next day, just my luck! I could’ve extended my stay, but that would mean I wouldn’t be able to visit the kids again in Kathmandu. It wasn’t a difficult decision and I stuck with the reason I came to this country. I said my farewells and wished the ladies well for the remainder of their trip. The great thing about this experience is you can genuinely make friends and I hope to meet them again soon one day.

I will visit SERC one more time to present some gifts to the children before I move onto my next destination. Pokhara as a whole represented a mixed bag for me, naturally beautiful and on the other hand very frustrating. Suman, the hostel host refunded most of my money too for the room so there was no hard feelings. I had a lot of time to think in my three days there. I’ll make up for the paragliding disappointment somewhere along the way. Next stop – back to Kathmandu!

Ps. You can find more photos here now that I have a better connection.