The island was a far cry from an idyllic paradise. It was noisy and crowded. There was a large strip of bars and restaurants by the pier. Think club 18-30s. It was noticeably warmer here, with no place for shade. I could feel the back of my neck toasting.

We opted against taking a ‘horse taxi’ – not far off a wedding carriage. Instead, we trawled through alleyway after alleyway, slaloming out of the way of the ‘Tour de France-like’ cyclists. As we walked, it became quieter and started to feel more local. There were small kiosks attached to homes and lots of children playing in their yards.

We arrived at the M-Box hostel with little expectation. There was a swimming pool, filled with inflatables and equipped with a basketball net. The music was blaring out and there were a few bodies trying to get that glow by the pool. Our room was a decent size and luckily away from the noise.

After freshening up, we took a stroll back to the strip to have a late lunch. My peanut translation card came into play for the first time. The usual scenario ensued – waiter looks alarmed, speaks to a colleague, goes into the kitchen and then I get a nod for reassurance. I continue to operate on trust, but the EpiPen is never too far away. 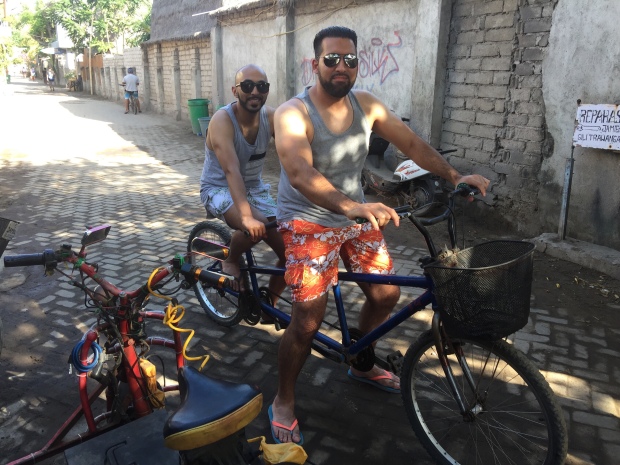 We later worked our way down the strip to get our bearings. It was clear that cycling around the island was a popular choice. I may have mentioned before that I can’t ride a bike and there wasn’t enough time to learn here. But we did come across a chap who had a tandem bike in stock. One for the romantics, but it’s the only option we had. Farhan led from the front. I obviously couldn’t be trusted. We ventured around the island, mostly ‘off-road’ through jungle-like terrain and took respite at the beach, where two giant swings were stationed in the sea – a perfect photo opp beckoned. The rocks in the water were unforgiving and the water wasn’t much kinder. Farhan just about mounted the rickety old swing. But we managed to get a snap, albeit as silhouettes. 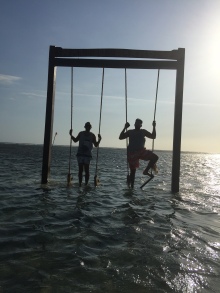 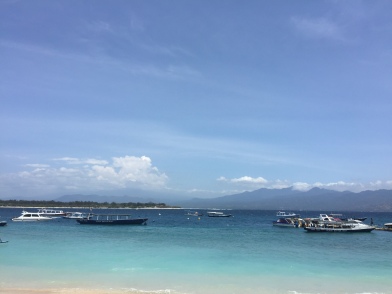 We headed back to the hostel before it got dark and took a quick swim. Feeling refreshed we headed out for dinner. Most of the restaurants had outdoor seating and they all looked similar, offering seafood cuisine. It was hard to make a decision. But we came across a place with a live band. A reggae act in fact. Our waiter Rio was an excitable lad. He spoke English pretty well and he tested out his best Cockney accent. “You olrite mate” and the word ‘war-tah’ had him in hysterics. Meanwhile, the band showed their versatility and transformed into a rock tribute act. It was a bit weird, but they were pretty good. No one really paid much attention to them apart from us.

Following dinner we did a bar crawl and settled on a place with another reggae singer, who sang most of Bob Marley’s back catalogue. We made a few friends along the way,  Brits in fact (what happens in Gili stays in Gili). I somehow ended up having a conversation about dubstep and grime with a DJ from Seattle and a girl from Hawaii, which led to me pitching my app (coming soon) to them and others.

Going back to the hostel wasn’t straightforward. There wasn’t much lighting and for solo female travellers, I can imagine this to be quite daunting after a night out. At the hostel we were greeted by a group of lively Danish lads, who clearly wanted the party to continue. We didn’t. We had a morning boat to catch for Gili Meno and didn’t have the required energy. 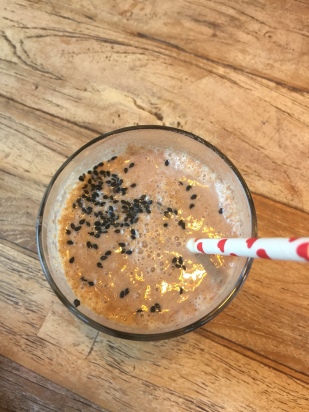 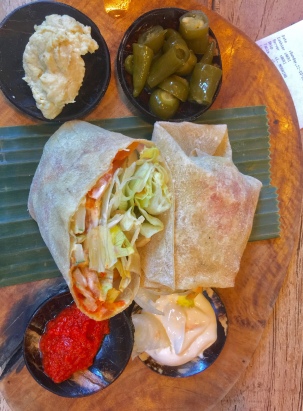 In the morning we stopped at Kayu Café for breakfast. Probably not the best idea to hop on board a dodgy wooden boat on a full stomach. But thankfully it was a short journey. In fact, close enough that you could still see Gili Trawangan from the other side. Immediately you noticed a difference between both islands. It was almost deserted. It was clean, but also very peaceful.

We decided to take a ‘horse taxi’ because our hotel looked far away. The taxi was kitted with bells, it jingled for the whole journey. The driver every once in a while whistles and whips the horse with straw. Not your every day Uber. 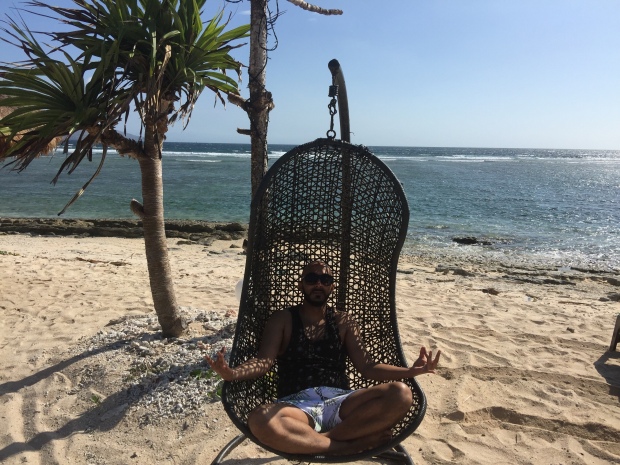 Our hotel was conveniently by the beach and had its own infinity pool. Again, it appeared quite isolated. But it was the perfect place for us to relax. There wasn’t really anything to do on the island. Were we missing something?

There wasn’t much choice for dinner either as quite a few places were closed. A lot of the businesses must be seasonal. The one place we did stop at seemed surprised that we even ordered food. So much so, they went elsewhere to collect the food. Who knows where they cooked it? But we didn’t really get to eat much. We were terrorised by their resident kitten, who was trying to nab our grub and not one person control the tart.

We took a few wrong turns following dinner, so much so we ended up in a mini village. Given that it was pitch black, I tried not to look down in case we stumbled across anything dangerous. Eventually we found a lit path and managed to find our hotel. We needed an early night. A complicated journey lay ahead – a whistle stop tour of Nusa Penida and then onto Ubud. On paper this was doable, but practically it was going to be challenging. And we’d soon to find out why.